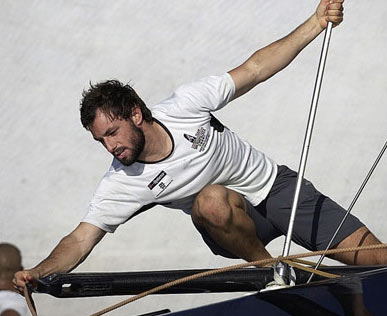 I have pleasure in recommending Michal Hadala as a top-level sports physiotherapist. As someone highly qualified for his age, and with an ever-present hunger to continue his learning, he was able to provide cutting-edge training and treatment for our team of sailors competing in the 2005-2007 America`s Cup yachting competition.

His assistance to me personally went to a further level as he helped me recover and return to full fitness after I broke my L2 vertebrae in a sailing accident in August 2006. By November I was back in the gym doing weights, and in February I was back on the America`s Cup yacht, finally competing in all races of the 2007 America`s Cup season.

His skills in recovery from serious injuries actually go back some time, as he had previously invested much time in this area. Perhaps because of this, Michal is extremely focused on preventing injury, and has a passion for implementing and maintaining a program that includes a lot of work on the core abdominal and lower back muscles, as well as stretching and balance work. These have turned out to be fundamental to all members of the crew, regardless of the nature of their physical activities, and resulted in an almost total reduction of injuries.